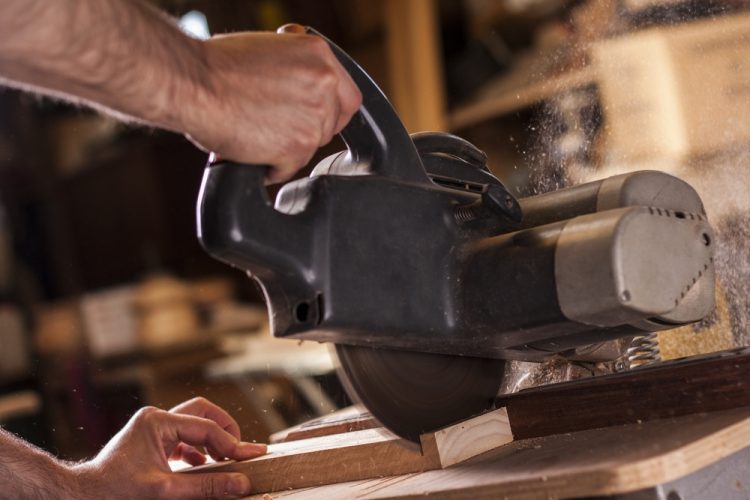 Have you been using a miter saw for some time? Or have you been thinking of buying one for your workshop but not sure how to make the most of it?

Don’t worry! This article will answer all your questions about miter saws in detail. Keep reading!

How Does a Miter Saw Work?

The blade is a cutting disc on the saw; it either has a sharp plain or a serrated-edge blade. These blades vary in size, starting from 8” till 12”: the most common size is 10”.

Various edges are available. Their actions depend on the number of teeth (which can be up to 100) rightly paired with the blade’s size.

A suitable blade will give you smooth and best-trimmed edges with less kerf (cut’s width or blade’s thickness). A blade guard helps cover the blade.

The engine is the electronic part that provides the energy to roll the blade. It is attached to the mounted part of the saw. There’s a motor fixed in this engine that determines the blade’s revolution per minute (RPM).

The more the amperes, the more the power; hence, more electricity consumed. Different types of miter saws use different engines, and the power ratings range from 10-15 amps (1200-1800 watts).

Here, a miter saw gives more precision and clarity. This saw is usually fixed, with its head moving sidewise. It can angle the blade on the index available: usually at 45°.

A standard saw can make bevel cuts easily, but it can only tilt to one side. So, due to the flipping problem, it takes time. Nonetheless, it’s great for domestic use.

The double-bevel miter saw can make bevel motion to either side: giving more efficiency by solving the flipping problem.

For the miter, the miter saw is perfect. For a miter cut, the blade doesn’t tilt but moves at 45° or more. Along with its usual 90° movements for precise straight cuts, it’s a great tool for accurate miter cuts.

The best options are those that can cut on both sides simultaneously. They reduce the human effort of unjacking the workpiece from the vise and setting it up again.

The laser guide system offers more precision and speed. It works as an extra eye. Some lasers come with a laser kerf and give the idea of the cut’s width as well.

A washer-like laser kerf attaches to the blade and gives a laser line on the workpiece for the perfect cut.

Some saws come with a built-in laser guide. Those without a laser always install one later for maximum precision.

This essential system requires a dust bag that fills up with dust, and little woodcuts when cutting.

Another option involves adapters, a vacuum cleaner, and a bag. These objects, when properly assembled, can suck the leftovers.

Without it, several problems arise: little particles can stick to the engine or other parts and ruin everything. Furthermore, this residue can come back at you and harm your eyes. So, use working glasses.

Some saws have a built-in system; if not, you can easily buy one.

They give more room for the workpiece and handle larger workpieces to cut with full support. These assisting extensions can provide more stability and precision.

These extensions should be held tight because their firm grip is responsible for the balance.

Common tables have diameters of less than 24”. If the workpiece is lengthy and heavy, it needs to be placed tightly on both ends, and that’s where table extensions are helpful.

A shaft lock is used to lock the blade and the shaft. It fits around the two flats on the arbitrate shaft. Moreover, it helps to control the uneven movement of the blade; that’s why it is important to be intact. It also eases the changing pattern of the blade.

What Does a Miter Saw Do?

Miter saws are commonly used to make miter cuts due to their high precision. To make this cut, turn the blade of the saw from one side to another. Then, mark the angles on the miter index.

The size of the blade and cut’s length determines its angling limits, but commonly the cutting angle can extend to 50° sidewise. However, you can add extra angles as well.

A miter saw can easily make miter or angled cuts and prove useful in a lot of situations. Examples include furniture and frame making (means cutting 2 sides at 45° and connecting these corners to make a 90° angle), trimming, and more.

A cross cut is a straightforward cut. It can be made by a hand or circular saw, but the miter saw is the best choice for it.

The miter saw will help align the blade against the board with the help of “stops,” given on different angles, and can block its swivel motion. It can also offer best-trimmed edges with less thickness.

A cross cut on a wide workpiece is quite difficult, and can only be cut accurately with a table saw. However, with a sliding miter saw and laser guide system, this cut can be made on a board up to 12” wide.

Some more features of the saw are:

A bevel cut can be problematic for a circular saw. On the other hand, a miter saw needs no human control or balance when cutting. It will give you miter-index on the mounted part, and the bedded part and the angled-shape fence: these all will give you the master class in bevel cuts.

This cut helps in:

Frame making is one of the types of work that we can perform with the miter saw. In frame making, you need to miter cut one workpiece at the right angle, to connect with another edge of the workpiece, by making a combined 90° angle.

For a 90° angle, a miter saw will give an angle of 45°on both board edges. In this way, you can connect them while keeping an aesthetic look.

If you want perfect finishing and trimming, pick the miter saw, because the angles are fixed at different “stops.” In addition to this, the availability of the gauge will make your work flawless.

As frame making gets help from the miter saw with the perfect miter cut, crown molding’s first choice would also be the miter saw. This is due to the stability and perfectly angled cuts.

After all the technical work of dealing angles, no other saw can be as perfect as the miter saw when it comes to the cutting. For instance, as per some calculation, if you want a 90° corner, bevel cut at 33.9° angle and miter cut at 31.6°. These angles will be set on the gauge for your ease.

Crown molding is one of the finest works of artistry, which can be done using effective compound cuts.

A compound cut is the cut where you need miter and bevel cut. So, you can use a compound miter saw, which will give a perfect blend of these two cuts. The work will be so neat and efficient that you can actually match those edges after cutting and see them placed together as if there is no cut.

Repeatable cuts are the type of cuts that you need to carry to a certain point over and over again. So, for that, what you can do is fix the length of the cut on gauge and get the perfectly-sized cuts.

Now that you have a better understanding of the miter saw and its mechanics and functions, get your power tool, put it in application, and tell us in the comments below what you did with your saw.

1. Can a miter saw cut straight?

Ans: No. Though it can cut lighter metal, it is not preferable. Still, if you want to drag it, you need to be very thoughtful about the blade you use.

Ans: Yes, you can. This means you can cut lengthy woods and that also at specific angles. However, keep in mind that a table saw can’t work with those tricky angles as a miter saw.

4. Can I use a circular saw instead of a miter saw?

Ans: Yes, but the miter saw gives more accuracy, stability, and better trimming of different cuts. Even though the versatility belongs to the circular saw, it can never be that accurate.